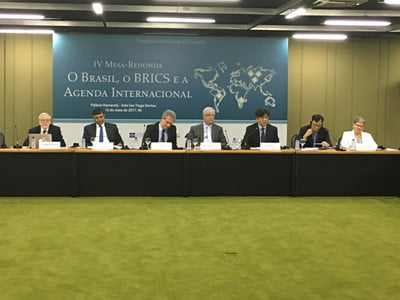 BRICS POLICY CENTER PARTICIPATES IN THE “IV ROUNDTABLE BRAZIL, THE BRICS AND THE INTERNATIONAL AGENDA”

On May 16th, 2017 the Alexandre de Gusmão Foundation (FUNAG) and the Department of Inter-Regional Mechanisms of the Ministry of Foreign Affairs held the IV Round table “Brazil, the BRICS and the International Agenda”. A total of four panels were organized. They dealt with topics such as “the BRICS and the international insertion of Brazil”, “the evolution of the BRICS from a partners perspective”, “BRICS’ investments and financial cooperation” and, to close the event, “commercial policy cooperation”.

Diplomats, scholars and representatives of the government were part of the event. The BRICS Policy Center was present and represented by its General Supervisor, Prof. Paulo Esteves. As a member of the first panel of debates, Esteves highlighted three points: (i) For Brazil, the group was an instrument to gain visibility and to contribute to the decentralization of power and to the reform of the International Financial Institutions (IFIs); (ii) Despite the prolific pressure to reform the IFIs, the group is divided into two different perspectives: the Chinese one, which emphasizes inter-regional dynamics through outreach; and the Russian perspective, which is aimed to bring geopolitics and the equilibrium of power back; (iii) It is important to recognize how much those perspectives have changed the group, as well as the transformations that occurred around the world and in Brazil in 2016.

Concerning the recommendations, the professor advised against crossed objectives and suggested the guarantee of a safe zone of actions. He talked about a possible and interesting initiative to revalue the IBSA and eventually create a mechanism of dialogue between the IBSA and developed countries.

To watch the video of the event, click here.