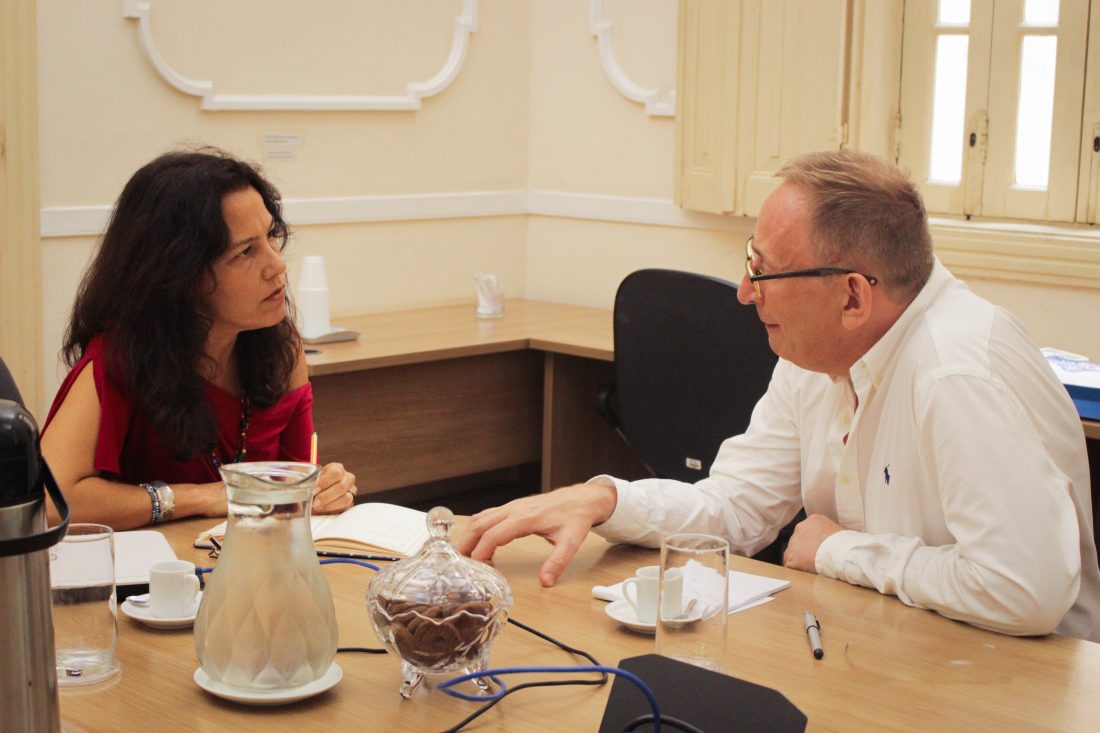 On October 30, Mr. Jack Lohman, CEO of the Royal British Columbia Museum of Canada, was in Brazil with the prospect of establishing partnerships, in particular with the Ethnology Department of the National Museum’s Anthropology Department, whose curator is Professor João Pacheco de Oliveira. Given his absence, they were in the BRICS Policy Center meeting room, Mr. Lohman, anthropologist Dr. Renata Curcio Valente, from the Ethnology Sector team (and former Ph.D. student at the Pontifical Catholic University, PUC-Rio) talking about the National Museum’s ethnology restructuring project and possible future partnerships between the two institutions.

Lohman commented on provocative aspects and museum challenges presented in his new book “Great Expectations: Reflections on Museums and Canada (2019)“. He also spoke about the different experiences in Brazil and Canada regarding the shared management of museums, in addition to the policies of indigenous collection formation and the repatriation of ethnographic collections by indigenous people, as both countries have a strong indigenous presence in their population formation. , being increasingly present its role in decision-making processes, especially in cultural and museological policies.

In this sense, the prospects for collaboration and partnership between museums, especially regarding the formation of indigenous collections and experiences with digital collections, are very stimulating and the prospects rewarding. In addition, he proposed collaborative work on an exhibition he intends to do about indigenous peoples of the Amazon.

Finally, Lohman praised the quality of the facilities of the BRICS Policy Center, which keeps alive and preserved not only the house but also the memory of Afonso Arinos.

Jack Lohman CBE, born in Jacek Lohman, is currently the chief executive officer (CEO) of the Royal British Columbia Museum, Canada. He has been director of the London Museum and is president of the Canadian Museum Association, member of the Adam Mickiewicz Institute Council and the Warsaw City Museum. He is also a board member of the British Columbia Achievement Foundation. He published, in addition to Great Expectations Museums on the Crossroads: Essays on Cultural Institutions in a Time of Change (2013) Museums, the Media and Refugees (2008) Human Remains and Museum Practice (2006).